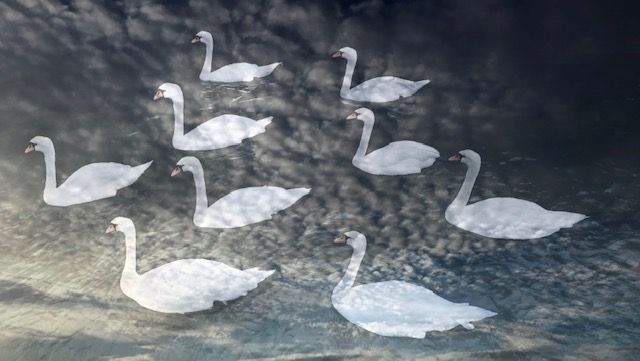 In the very early 80’s I began to realise that that there may something to be said for a multiple exposure technique.

In those early days it required some basic maths. A quick press on a very small button on the bottom of the camera would ensure a re-cocking of the camera shutter yet at the same time not transporting the film. If the aperture remained constant the maths was a matter of simply doubling up the shutter speed.
No auto gain or overlay options in those days and of course no quick reviewing of the image.

Where a  single exposure of perhaps 1/125 th at f.11 delivered a correct exposure, a wish to adopt a multiple exposure programme of perhaps 16 with the aperture remaining constant at f.11 would require a series of exposures of 1/2000th of a second each.

It was only after the E6 process of the transparency film came back from the lab that one could see what a complete and total disaster the multiple exposure attempts had been! The variables of  changing light and perhaps a little reciprocity law failure thrown in (not to be spoken after a particular type of refreshment) did one learn that multiple exposures were far from being  an exact science.

But once in a while, very once in a while an image was produced that came near to being acceptable.
All rather different now and some beautiful multiple exposures being produced by members of our wonderful photographic community.